Wisbech Roller Speed Club was formed back in 1978 by John Smith as a quad speed skating club and within just one year was thriving with over 60 members, ranging in age from 9 to 60 years old. They trained at The Hudson centre in Wisbech twice a week and within a year were racing competitively and were affiliated to the National Skating Association. The club committee consisted of Stan Balls (Chairman), John Smith (Club Timekeeper), Roly Walton (Vice Chairman), Angela Balls (Secretary). 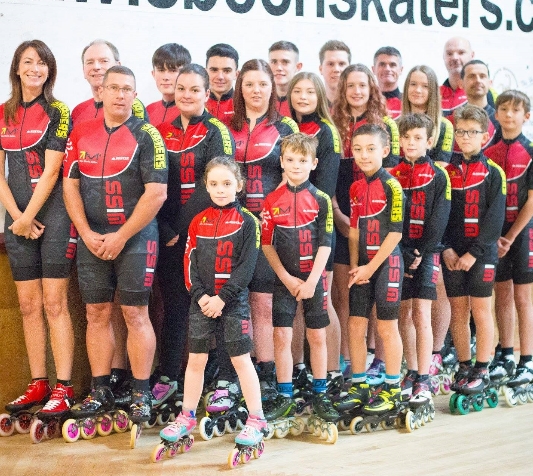 The committee members certainly held a good skating pedigree. John Smith is a seasoned speed skater both on ice and on quad skates with both his sons following in his footsteps. Roly Walton, skated regularly into his 80’s and is also a seasoned speed skater. He and his wife Margaret raised their four daughters on skates and between them raced regularly, winning races and championships in Britain as well as abroad at European level. Stan Balls is a retired figure skater who competed in the British Professional Pair roller skating championships in the 1950’s.

Hugh Doggett Snr took over the club as Anglia Roller Speed Skating Club in 1981 and was head coach as well as Chairman alongside his wife Marion, who was Club Treasurer. Their sons, Hugh Jnr and Alex, were both regularly winning races and competing in both the British and European championships. Alex was even featured on Blue Peter, a very highly regarded children’s TV show, popular in the 70’s and 80’s!

The Club worked tirelessly in the mid to late 80’s trying to raise publicity and interest and funds for a much-needed outdoor track. They raised a petition with the general public and gained the support of locals, but sadly it wasn’t enough to be successful, despite the club having British and European Champions in its midst. After splitting into two in the 1980’s the new clubs were known as Anglia Rollers and Fenland Rollers. Both clubs enjoyed successes at club level in Britain, bringing back medals, trophies, track records and champions. Members also successfully qualified to represent Great Britain at European and World level and travelled all over the world to compete.

These days the club is known as Wisbech Inline Speed and is affiliated to the speed skating governing body, Federation of Inline Speed Skating. We have over 25 active members who train up to three times a week and compete regularly both in the UK and further afield in Europe. Club coach Mike McInerney holds the record for most British titles with 47 by the end of 2018. From 2016 to 2018 the club gained 11 British Champions with 2018 proving to be their most successful season in recent years. An energetic relay race in the senior mens British Championships indoor event saw Wisbech winners Flynn McGurk and Mike become Relay Champions along with winning the Best Performance of 2018 award. Twin sisters Eve and Lucy broke the record by a whopping 30 seconds for the senior womens indoor relay race to become British champions. In the British Championships the team won a combined total of 30 British Titles with their 9 Champions, bringing home a total of 71 gold, silver and bronze medals. You can see all their achievements on the Club Statistics and Results pages.

We have two coaches, Mike and Glen, who are both Level 3 trained. We have an active committee, currently dedicated to raising funds for the hotly anticipated outdoor track. Some of our committee members are also members of the FISS committee and are officials at race meetings. We are a busy club!